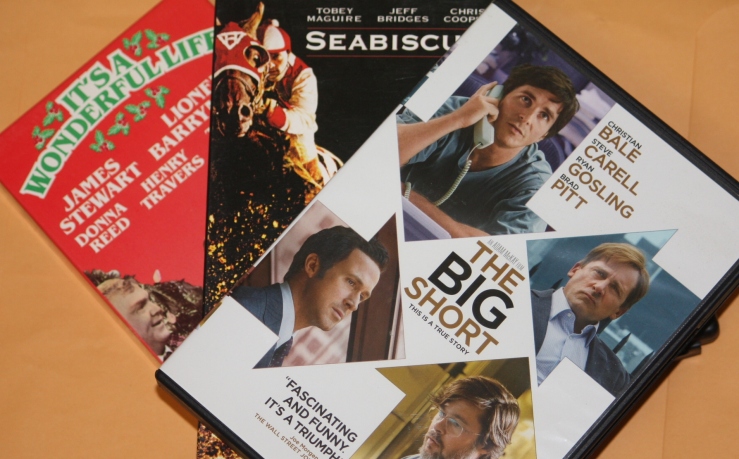 In most business text books each chapter will focus on one subject and provide case studies of how that subject material was used in real-world applications. This is an effective teaching method because it illustrates that the material being presented in the text has practical applications to every-day business experiences.

Individual entrepreneurship is a prized quality in the United States. So it should not be surprising that the real-life struggles of individual businessmen and women can be used as plots in documentaries about the “Robber Barons” of the 19th and 20th centuries or fictional works where some evildoer seeks to impose his will on an innocent population which is defended by the heroes in the movie. Such a theme was used in the silent films where some attractive actress lashed to the railroad tracks was rescued in the nick of time by a dashingly attractive cowboy, who in the later talkies might also be required to sing. John Wayne started out as a singing cowboy, but Gene Autry was more successful in making music a significant part of his career path.

Examinations of the struggles, successes, failures and comebacks of businesses and their owners combined with sometimes bazaar personal lives involving well-known figures of popular culture provides a ready-made plot that can often be punctuated with real-life events from the person’s past to make an exciting movie. Most commonly, male figures interacted with some of the most attractive women in the world which added to the movie’s general appeal. If not, a love interest could be added to the script.

It’s a Wonderful Life (1946) staring Jimmy Steward is the most often viewed business-related movie due to its acceptance as a Christmas classic that  is seen in millions of homes each year. In this movie a small-town banker manages to hold out when a lost deposit imperils the bank that he inherited from his father and threatens not only his economic future, but also his life. One would hope to have a banker that was that caring about his bank and customers, but such institutions have become more impersonal and greedy as they became large corporations. Wells Fargo is a historic bank has been cited on numerous occasions for actions that were not in the best interest of its customers. It was a greedy, grabbing institution when it was founded and has not significantly changed its character after more than a century, as indicated by recent court actions against the bank.

Tucker: The Man and His Dream (1988) starring Jeff Bridges is a biographical piece that traces the life of Preston Tucker who introduced a car after World War II that was so revolutionary that it threatened existing auto makers. Through pressures the established car companies brought on members of congress, a largely invented case was brought against Tucker to force him out of business before his cars had a chance to make an impact on the market. The Tucker cars were pre-sold, and the principle claim against the company was that sought to defraud the public by not fulfilling its lease agreement with the Federal Government. Many of the innovative features introduced with the Tucker were later incorporated in standard model cars make by Detroit automakers. Some 500 Tucker cars were made and are highly prized collectors’ items today. This was an unusual movie, because it depicts a business failure, rather than a success. It is a cautionary tale that warns, “If you are going to produce something new, allow enough time to perfect your design before you have to deliver the product.”

The Aviator (2004) with Leonardo DiCaprio explores some of the many facets of the life of Howard Hughes. Before World War II Hughes was fascinated with airplanes to the extent that he used money from his father’s successful oilfield supply company to build and race experimental aircraft. He was also a movie maker and after an initial flop made a very successful movie Hell’s Angels in 1930 featuring and filming World War I biplanes in battle sequences. This movie was made at the transition between silent and talking films, and after nearly completing a silent version of the movie; he remade it as a talking film. During World War II he was contracted to build a very large transport plane to take large numbers of troops to distant islands in the Pacific war. This enormous float plane, “The Spruce Goose,” used many wooden elements in its construction.  Again, claims were made that the Federal contract was not fulfilled and he, who at that time was suffering from serious psychological problems, had to defend himself at congressional hearings. He took the initiative and made one flight with the “Spruce Goose” and successfully landed the aircraft. It was taken apart, put into storage and never flew again. Few entrepreneurs have the money to self-finance their own projects. If you can, do not let other issues get in the way.  You will need to be watchful of changing markets and be prepared to adapt if necessary to defend your actions.  If you do anything worthwhile, there will be those who will oppose you. Hughes’ life is a cautionary tale for those who now head companies like Apple, Amazon, Google, Facebook, etc. Be prepared to face increasingly nasty hearings and court challenges to the core aspects of your businesses in regards to privacy issues concerning information gathering and sharing.

Sea Biscuit (2003), again with Jeff Bridges, has a multi-character plot line centered on Charles S. Howard’s founding a successful automobile business. He faces extreme stress during the depression including losing a child and getting divorced. He becomes the almost accidental owner of a horse, Sea Biscuit. Howard is quoted as describing the situation that the horse “was too small, hired a trainer who was too old, a jockey that was too big and being too stupid to know the difference.” In the movie both the horse and the jockey make a comeback after being injured. Sea Biscuit races and wins against a much larger horse. Although in many ways underdogs, the actors and the horse rise against a series of seemingly impossible obstacles and win. The message here is keep plugging away and you may accomplish your goals.  If you don’t try, you never will succeed.

The Big Short (2015  ) with Christian Bale, Steve Carell, Ryan Gosling and Brad Pitt features four diverse characters  who observed the events leading up to the collapse of Wall Street in 2008      and let their instincts that the real-estate market was unsustainable guide them to short mortgage-backed securities that were being traded by banks all over the world. These supposedly AAA rated securities were filled with loans to people who had little chance of meeting their financial obligations. As loan defaults accumulated to an unsustainable level, the market collapsed. Many people lost their jobs, once powerful Wall Street firms were liquidated, the Government was forced to buy stocks in major companies to keep them afloat and the real-estate market was depressed for a decade. The movie illustrates that markets can turn on a knife-edge. Investigate very carefully the wisdom of your investments, ride trends with disposable money and keep the bulk of your investments in not-so-risky segments of the market.

The Wolf of Wall Street (2013) features Leonardo DiCaprio as a young executive who arrives at Wall Street just in time for it to collapse. He takes a job with a firm selling penny stocks and makes an enormously successful enlargement of this business by teaching new selling methods to some unlikely employees. Ultimately the firm collapses, and he with many of his employees are tried for issuing false financial documents and other charges. He lives an exciting life fueled largely on illegal drugs and alcohol. A rich drug addict turns out to be about as worthless as a poor drug addict. His life, although successful from a monetary point of view, turns out not to count for very much.

The Men Who Built America (2012) was a History Channel four-part mini-series that ran for six hours. It featured the lives of Cornelius Vanderbilt, John D. Rockefeller, Andrew Carnegie, J.P. Morgan, Thomas Edison and Henry Ford.  In the case of everyone but Vanderbilt, who built his fortune on the fur industry, the ability to recognize, adapt and market changing technologies were keys to their successes. They tried to establish monopolies in their respective fields which sometimes succeeded. New innovations in materials, manufacturing methods and distribution were often used to build and expand their companies. In retrospect is would seem that everything that they did was obvious, but the obvious is not nearly so apparent when you are in the moment. Sam Walton is a modern example of a businessman who adapted a new distribution model combined with store-front marketing to become a dominant player in retail trade with his Walmart stores. Walmart’s dominance is now being threatened by Amazon with its on-line sales model. Materials, technologies and selling methods are continuously evolving. Those companies who can foresee and capitalize on these changing market forces will succeed. Those who will not or cannot will likely see their portions of the market steadily erode to the point where their businesses are no longer profitable.

Due to the desired length for Self-Growth articles these are all I can feature in one piece. There are other business-related movies for you to look for and find and study dealing with writing, the arts and other aspects of inventive thought.  If you want to see more articles on this theme, reply.

1 thought on “Business Ed at the Movies”