Drawing from illustrator Alex Ehlers as a piece of art going with a story about an imagined hunt with his Grandpa when he was nine years old.

When I was a kid in rural Sandersville, Georgia, during the period from 1941 until 1958, I was what might be called a “free-range-kid.” Through my infancy and toddler years I had a nurse as well as an older sister who looked after me. I was white and my nurse was black as were the cook and yard man who help keep my Grandmother’s household going.

I was read to from the English classics as there was a grandmother and an aunt in the house who were both school teachers. I did, as boys are want to do, got into a little mild trouble from time to time. Some of the things were innocent, like pulling flowers from the yard and presenting them to my grandmother, instead of letting them grow where she had carefully planted them. The worst thing I did as a three-year-old boy was to go across the street to Adam’s Hardware store and buy a small can of yellow paint and proceed to repaint the white telephone box off the back porch a bright highway-stripe yellow. I was obviously inspired because workers had just completed stripping the old paint off the house and putting a fresh coat of white paint on it days before. That episode cost me a turpentine bath and scrub in the family tub, which I still vividly remember.

That house which sat off the edge of the town square had already been moved once to allow for the construction of the new Post Office during the depression years. It had witnessed the town’s burning by General W. T. Sherman’s troops in 1864, and his officers had been billeted in the home. Two lasting memories of that visit was a room stained with grease from confiscated cured hams that were hung on the walls and a black marble-topped table that Sherman, in a violent outburst, broke with the hilt of his sword. 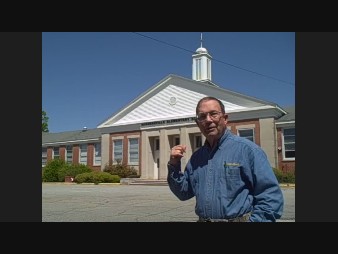 divided between my father and two aunts. This resulted in the family buying another house located half way between town and the combination Grammar and High School.  Not only was this house available it allowed my sister and I to walk a quarter-mile to school each day.  This we did in all weather. Only during the worst of thunderstorms were we ever driven to school. The only incident that I ever recall happening was when another kid riding his bike ran into us while he was distractedly looking at one of his buddies on the other side of the road. He was so intent on their racing that he just plowed into us.

Outside play during recess was mostly unsupervised. Once a year each class would be given a size-appropriate cardboard box of play equipment which would sometimes include balls and bats for outdoor play and  puzzles, coloring books and crayons for use on rainy days. Outside of the usual elbow and knee scrapes and being stung by a red wasp, I do not remember any particularly adverse events during my Grammar School days.

After my father’s death when I was 10, my mother took a sales job which caused her to be gone during the week and sometimes for weeks while she installed business schools in rural towns throughout the Southeast. The company, Perry Business Schools, would sign up sufficient participants in smallish towns, bring in instructors and teach practical business courses like typing, filing, accounting and office management to high-school graduates. In that analog society there was a large number of available jobs in the general secretarial field as each paper document had to be written, mailed and filed. An unmarried aunt moved in with us, but she also worked during the day.

As latch-key kids we were able to do our homework, whatever other tasks we needed to do, like mow or rake the lawn and gather pecans. The last were a particular asset to me because I could sell them downtown and easy get enough money to pay for my 35-cent movie tickets, 5-cent cokes and 10-cent bags of popcorn. This also bought no small number of comic books at a tiny store tucked in between two other buildings up from one of the town’s two movie houses. The oldest, an Art-Deco building known as the Pastime, still showed movies up to a few months ago.

Saturday afternoons after the lawn was mowed was mine. I was free to go downtown my myself, go to two double-features at the movie houses, buy whatever I wanted with the money I had and put any excess in my account at the local bank. Occasionally I would treat myself to a banana split at one of the town’s three drug stores on the square.

In the meantime, my mother remarried. My stepfather and I got along well, but he also worked. During High School I was involved in extracurricular including being on the same Debate Team with the present Governor of Georgia, Nathan Deal. He an I had been playmates during a summer that I spent with my mother’s sister on their large farm near Tennille, Georgia.  Letting kids spend time with their rural relatives was not an unusual event at that time. In some communities the extra help that an active teen could give his older relatives at harvest time was vital to the family’s economic success. In fact, school was let out for a week in September during cotton-picking season.

I never had a chance to hunt with my dad, but did with my stepdad. While in High School I would sometimes take a .22 Rifle and squirrel hunt on some swampy land we owned that was within the city limits of town. To have a 10-year-old walking through town with a gun, sack and maybe a dog was so commonplace, as not to cause a comment. I can’t say that everyone in town knew me, but many did. I would not recommend that any kid anywhere try that today. The times that I did something similar was in Lake Placid, New York and in Seward, Nebraska.  In New York I had the gun in a leather-fringed case and in Nebraska I was carrying my blunderbuss while in costume for the event prior to giving a performance. You can see my performance in Seward at: https://youtu.be/x6kNXvHyJ7w.

We boys often carried pocket knives to school and in High School during hunting season those of us who were fortunately enough to have use of a car often had a gun and hunting stuff in the vehicle. Such activities today would very likely bring instant expulsion, even though there was never any intent to do harm to anyone.

During the decades while I was in the military and working in Alaska, parenting styles changed to the point where the free-range-kid that I largely was, became children who must be under constant supervision of a responsible adult. This resulted in the rise of helicopter parenting which came to be seen as the norm, at least in white suburban society.  Children were to be constantly exposed to different enriching events at a dizzying pace. Somewhere along the way this method of parenting became the norm to the degree that it was codified into laws. A parent could be charged with child neglect if he dared to let his children walk to school, go to town and generally allowed to do things on his own.

Added to this is the constant distraction of phones, smartphones and screen events on almost everything and the constant bombardment of externally stimuli from every direction. In this environment children react, but do not have the opportunity to do practical real-world problem solving, invent their own games, do their own play and have their mini-adventures as we did. It is entirely possible with millions of participants that some of these adventures will end in death. All life ends in death, some sooner than later. That too, is part of growing up in the real world.

Every parent who gives his teen a set of car keys has the hidden dread that this may be the last time they see their children alive. They can but hope that they have taught their children well and that those lessons have been well learned. Nonetheless, limits are set, a time to return home is agreed on,  the risks are accepted and the children are released on the nation’s highways. The parent remains legally responsible for their minor children’s activities.

Utah recently passed a law that allows parents to permit their children to do unsupervised activities such as to walk to school or to go to nearby playgrounds, libraries, etc., without direct parental supervision. That both positive and negative events will happen to these children is a consequence of living. From my own experiences I can say that the results of a free-range childhood as had by me and my same-age rural residents has helped us become inventive, creative and more positively responsive to life than many children appear to be today. In many ways, what many of today’s over-supervised children gain in exposure is lost in the ability to be personally creative, solve practical problems, develop empathy and have multi-cultural experiences.

My suggestion is to take some risks and let your children have the opportunity to be kids.

These thoughts were prompted by my working on my forthcoming book, Create Your Own Job Security: Plan To Start Your Own Business in Midlife, which will be available in August. To secure an early autographed copy of the book with free shipping you may use the PayPal button below.